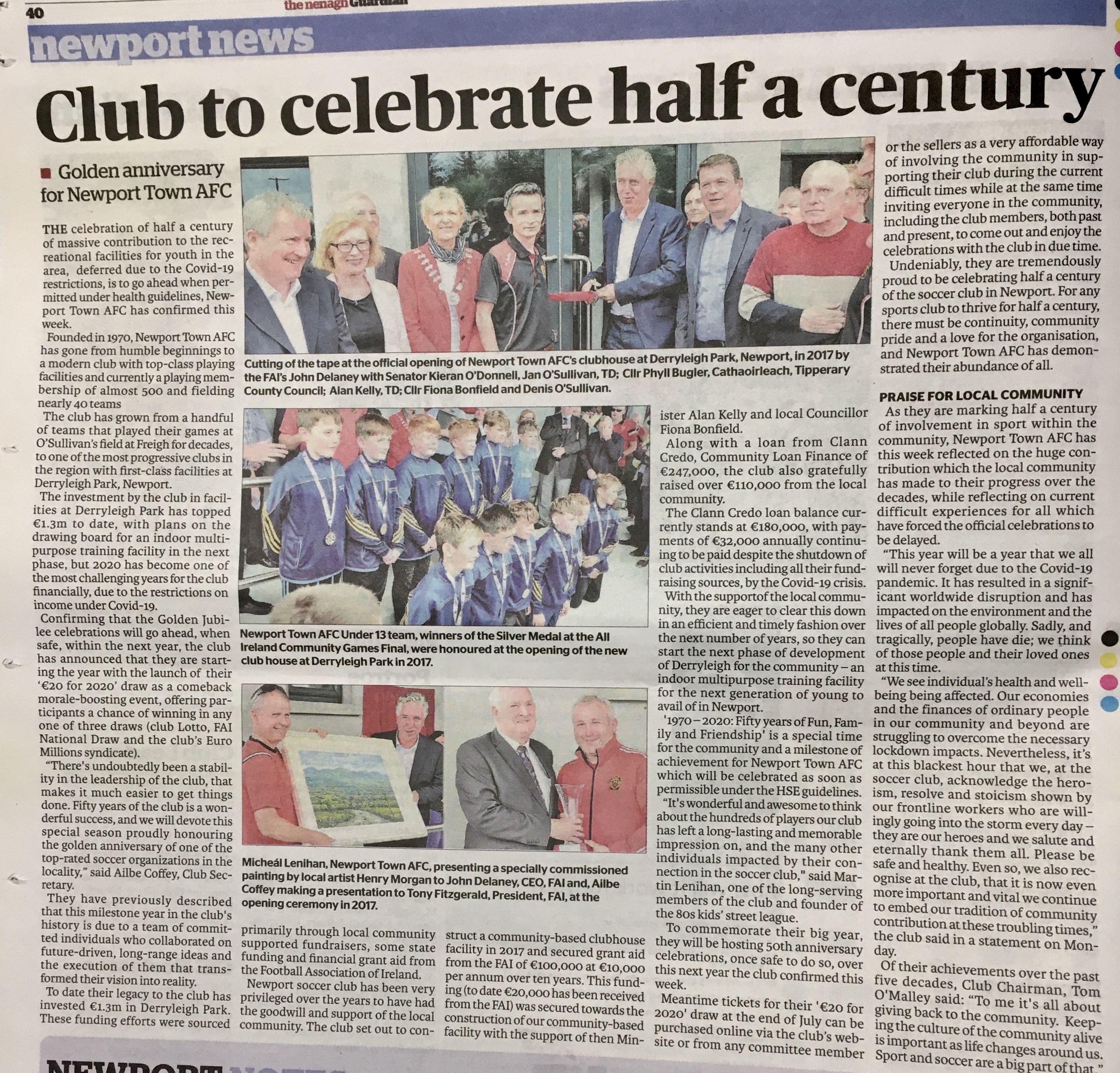 Thanks to Nenagh Guardian and local reporter, Martin Ryan, for a great article highlighting the launch of our €20 for 2020 Fundraiser and our 50th Anniversary.

The full press release is below.

2020 is a special time for us, at Newport Town A.F.C. and for our community too. This year, marks Newport Soccer Club's 50th Anniversary - our Golden Anniversary, a celebration and indeed, congratulations on fifty years of unforgettable moments promoting the growth and development of sport, soccer, and social inclusion in the Newport community. Indeed, soccer or association football, historically goes back further than fifty years, with games being played in O’Mahony’s field prior to the official formation of the club in 1970. Meeting in O’Sullivan’s snug at the time, our founding fathers, who thanks to their hard work and dedication, set the foundations of one of the top clubs locally now. The club has grown from a handful of teams that played their games at O’Sullivan’s field at Freigh for decades, to now approaching 40 teams and over 500 players competing at the first-class facilities at Derryleigh Park, Newport.

One of the keys to Newport Town A.F.C. not only existing but flourishing in the fifty years of the club, are thanks in large part to a dedicated and supportive group of parents, guardians, volunteers, donors and sponsors, as well as the players and coaches. It has a long standing tradition of serving as a unifying force in the community that strives to enrich the lives of our area’s youth and adults by offering the opportunity for everyone to play the sport – regardless of age, ability, gender, race or socioeconomic status. If you can kick a ball and move after it, you can play soccer, and there is a level playing field for your talents.

It's wonderful and awesome to think about the hundreds of players our club has left a long-lasting and memorable impression on, and the many other individuals impacted by their connection in the soccer club Martin Lenihan, one of the long serving members of the club and founder of the 80’s kids’ street leagues, recently said.

However, this year will also be a year that we all will never forget due to the COVID-19 pandemic. It has resulted in a significant worldwide disruption and has impacted on the environment and the lives of all people globally. Sadly, and tragically, people have died, we think of those people and their loved ones at this time. We see individual’s health and wellbeing being affected. Our economies and the finances of ordinary people in our community and beyond are struggling to overcome the necessary lockdown impacts. Nevertheless, it’s at this blackest hour that we, at the soccer club, acknowledge the heroism, resolve and stoicism shown by our front-line workers who are willingly going into the storm every day – they are our heroes and we salute and eternally thank them all. Please be safe and healthy. Even so, we also recognize at the club, that it is now even more important and vital we continue to embed our tradition of community contribution at these troubling times.

To me it's all about giving back to the community, club Chairperson Tom O’Malley stated. Keeping the culture of the community alive is important as life changes around us. Sport and soccer are a big part of that.

With response to the May 18th 2020, announcement from Football Association of Ireland (F.A.I.), on a pathway for a safer return to football, the postponement of amateur football activities across Republic of Ireland has been extended to at least the 20th July, 2020 for review. The F.A.I. remains in communication with the Department of Health and other agencies and Newport Town A.F.C. will continue to follow all such guidelines. However, ‘hope springs eternal’ and football and sport will return to our community and beyond, soon. To commemorate our big year, we will be hosting 50th Anniversary Celebrations, once safe to do so, over this next year. We start our year this end of July with our 50th celebration draw ‘€20for2020’. We envisaged this event as a comeback morale-boosting event, where you have a chance of winning in any one of three draws (club Lotto, FAI National Draw & the club’s Euro Millions syndicate). Tickets can be purchased online via the club’s website or from any committee member or our sellers. It is also a very affordable way of involving our community in supporting their club during the current difficult times. Yet at the same time, inviting everyone in our community, including our club members, both past and present, to come out and enjoy our celebrations with us.

At a later date over the year ahead, we will include, our 50th Celebration Dinner Dance, Soccer tournaments for young and young at heart of all abilities, community based social gatherings, football-for-all events, club members’ trips, social media events, charity events, and also commemorating the history of association football in the Newport area. These celebration ideas are embedded in our hashtag #Derryleigh2020, launched in 2017 as we constructed our community facility in Derryleigh Park – “celebrating our past and building our future.” This vision will be achieved through linking our community, both past and present in building a social community identity.

We have previously described that this milestone year in our club's history is due to a team of committed individuals who collaborated on future-driven, long-range ideas and the execution of them that transformed their vision into reality. To date their legacy to the club has invested €1.3m in Derryleigh Park. These funding efforts were sourced primarily through local community supported fundraisers, some state funding and financial grant aid from the Football Association of Ireland. Newport soccer club has been very privileged over the years to have had the goodwill and support of the local community. The club set out to construct a community-based clubhouse facility in 2017 and secured grant aid from the FAI of €100k at €10k per annum over ten years. This funding (to date €20k has been received from the F.A.I.), was secured towards the construction of our community-based facility with the support of then Minister Alan Kelly and local Councillor Fiona Bonfield. Along with a loan from Clann Credo, Community Loan Finance of €247k, the club also gratefully raised over €110k from our local community. Our Clann Credo loan balance currently stands at €180k (€32k repayments per annum) which is continuing to be paid despite the shutdown of club activities including all our fundraising sources, by the COVID-19 crisis. With your support, we are eager to clear this down in an efficient and timely fashion over the next number of years, so we can start the next phase of development of Derryleigh for our community – an indoor multipurpose training facility for the next generation of young to avail of in Newport. #Derryleigh2020 has always been about starting the next fifty years strong.

There's undoubtedly been a stability in the leadership of the club, that makes it much easier to get things done.Fifty years of the club, is a wonderful success, and we will devote this special season proudly honouring the golden anniversary of one of the top-rated soccer organizations in the locality." Ailbe Coffey, Club Secretary.

I can't imagine being with another club, said Micheál Lenihan, Club Children’s Officer and Treasurer. I like to work at places I have an emotional attachment to, and Newport soccer club is right at the top of that list.

Undeniably, we are tremendously proud to be celebrating half a century of the soccer club in Newport. For any sports club to thrive for half a century, there must be continuity, community pride and a love for the organization. Today, a half-century later, Newport Town A.F.C. has grown to become one of the largest and most respected clubs in the locality. Over the coming twelve months, to celebrate, we will be highlighting a series of special events and fundraisers that reflect its community-focused foundation and mission.

We would like to Invite all past and present members of Newport Soccer Club and the local community to join us for a memorable year to celebrate our Golden Anniversary and despite difficult times, comeback stronger as a community.

Delighted to announce that after a 4 month break, our clu...

U16 girls put on 5 star display away to Knigh

The U16 girls recorded an excellent 5-0 win when they tra...

Congrats to Ger O'Brien - Winner of Last One Standing

Congrats to Ger O’Brien, who has won our Last One Standin...

Last One Standing moves onto Round 5 with 3 players still...

The 3 remaining players in Last One Standing all advanced...

FAI moves from Cessation to Kick-Off as Football prepares...